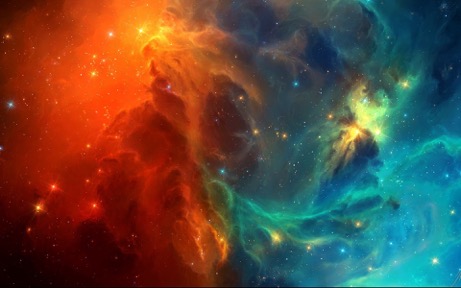 S is Sian and X is the client.  SC is the Sub-Conscious (Higher Self or Oversoul) Coming off the cloud:

X:  It’s very bright. It’s red and gold and yellow. It’s a planet, a red planet. I am a part of it. I am not anything separate from it except my consciousness is aware of myself being a part of the planet.

S:  You are a part of it, the planet is you and a part of you. Is that right?

X:  Yes. It feels free. Freedom to be a part of the planet.

S:  Are you able to describe yourself and the consciousness you have?

X:  It’s gaseous. The form of the planet is gaseous. It is the sun. I feel it’s where I begin and where I end. It’s weird being separate but being completely a part of it. Being an aspect of it and there are many parts of it. I am all those aspects too.

S:  Can you explain what it means to be separate, yet a part of it?

X:  It’s like you can imagine a zillion eyes covering a whole planet and each one of those eyes has a different sight of the whole, but it’s the whole, and every eye sees a little different.

S:  You are one eye, but a zillion eyes as well, and each one has a perspective of the whole. Do you support any life forms?

X:  It’s all alive but it has no need for any other form but the one form. It is like a liquid gaseous fire. It bubbles up like the liquid hot gold.  Very fiery hot gold and as it bubbles, it’s a consciousness. Each bubble, each flare, like conscious thoughts. The intensity of the heat comes from the centre of the planet. It’s not the same hot and fiery that I have known. It’s a different hot and fiery. When you are the hot and fiery, you don’t even know you are that.

S:  Do you know how you came into being i.e. how were you created?

X : The first light, the first flame and the darkness. It was a collision of 2 things, like 2 giant rocks. 2 giant dark planets that hit and sparked. Out of that collision came the fire. Out of the fire came the life, the first light, first flame which transformed out of the dark into the red planet, caused it to set afire. It all became a flame. Like the Central Sun, like the brain that sends out signals.

S:  I am trying to understand the sequence. Out of that first flame, it transformed one of the dark planets, caused it to be a light, then became a flame. How did the Red Planet come into existence?

X:  Somehow the flame became hard, dense. It started to take shape and form. The shape of a round planet. Like something was inside of it, that got ignited.

S:  Move ahead in time as that Red Planet to another significant event or time.

X:  The Red Planet is just moving through darkness and sending out light.  Somehow igniting, creating the Universe, other planets and the stars.  As it moves, it creates.

S:  Do you have an awareness of the process?

S:  How do you feel about your creations?

S:  Are you accountable to anyone or anything?

X:  It doesn’t feel separate from anybody or anything to be accountable to. I am just observing it and it’s just happening.

S:  Do you know what’s causing the other planets, stars to be created?

X:  I don’t know how. I am alone. But in that alone, I have everyone else. There is no one else. It’s just the way it is.

S:  Is there anything else happening?

X:  Just the beginning of creation. Darkness is responsible for creation. There was nothing in the beginning and the darkness was lonely and wanted to experience everything. It created everything.

S:  Ok. So you are observing creation…Let’s leave that scene and move ahead in time, still in that lifetime, to another significant event. What’s going on now?

X:  The birthplace of the heart in the universe.

S:  Tell me about that.  The birthplace of the heart of the Universe?

X:  It started out…. this blue colour, gaseous blue colour. Everything started as a gaseous state.

S:  Yes? And what happened from that gaseous state?

S:  And what do those signals do?  What effect do they have?  Do they have a purpose that you are aware of?

X:  The signals emanate everything.

S   What do they emanate?

X:  They emanate everything that is physical.

S:  So there are peopleas well that are emanated by the signals?

S:  And are you still observing all this as the Red Planet?

S:  So you became the blue gaseous state, the blue colour?

S:  All right.  So how does it feel to be that gaseous blue?

X:  It’s weird right now because I’m thinking.  I’m thinking that all these colours are radiating vibrations that cause things to be manifested.

S:  Everything is about vibration though, isn’t it?

S:  Mmmm….and you feel or think that that’s weird?

X: It’s not weird.  Is anything really there other than that vibration?

S:  Ok.  So all there is to you right now is there seems to be only vibration and nothing else but vibration? (Yes) And yet you say it’s weird because even thought there’s only vibration, things like planets, people are being emanated in the physical (Right) So that’s what you mean by weird huh?  (Yes) But it will all make sense in the end.  You said that this gaseous blue that you are is the birthplace of the heart of the Universe.  Can you tell us a little more about that if you are able to?

S:  And what is the purpose of that frequency?

X:   I think they’re the tones.The tones that expand the Universe.

S:   Do you know how these tones expand the Universe?

X:  They go deeper into the darkness.

S:  And what happens when they go deeper into the darkness?

S:  How does that happen?

X:  Oh…. the tones carry the Light.  The Light is carried on the tones.

S:  Oh I see, so the frequencies themselves carry Light? (Yes)  And then the Light goes into the darkness and lights up the darkness? (Yes). And what happens then?

X:  And something new gets created.

S:  What sort of new things get created?

S:  It’s making a lot of sense now isn’t it? (Yes).  How are you feeling about this whole process – what you are observing and who you are?

S:  What do you understand now?

S:  And is there a time when there is no more darkness?

S:  So the Light never stops.  It just keeps pouring in, more and more, is that right? (Yes) And it’s infinite (Yes). Infinite Light?

S: Beautiful.  What can you tell me about the consciousness of Love?  What is your understanding?

X:  When Love radiates on everything that it passes through, everything becomes love and Light.  It’s an expansion of Love that never ends.

S:  It goes on and on and on infinitely, doesn’t it?  (Yes). That’s a very beautiful

expression of what Light is and what Love is.

Later, the SC explained why They showed him the Red Planet Life:

SC:  He was there at the beginning.

S:  What is the significance of that?

SC:  Everyone and everything is at the beginning of Creation.  Everything is just taking different shapes and forms.

S:  I know there’s a purpose to every life too, but is there a connection at all between that life where he was there at the beginning of Creation, and his current life today in 2013?

SC:  It’s at the beginning of the next level of Creation.

S:  What do you mean he needs to come Home?

S:  I see.  So what you’re saying is you decided to take him back to where he was at the beginning of Creation, because that’s going Home, isn’t it? (Yes)  Back Home to the Light (Yes) Back Home to Source.  Back Home to All that Is, that’s what you’re talking about so he needs to have a remembrance of that time when he was birthed.  His origins, where he came from yes?

SC:  The only way that Creation can actually birth itself again, back to the Source, from the Source.

S:  Allright, so does he have that understanding now?

SC: He needs to go Home inside of himself which is where the birth of creation began and connect to the Source.

S:  So, what you’re saying is all these years., he’s been busy, busy, busy, stressed out to the nines and he has had no time for his spiritual practices – his meditation, his yoga, no time for stillness, no time to go within and what you’re really saying to him is that you really showed him this lifetime today to give him a glimpse of what Home is and to remind him that he needs to go back within, very important, to go back Home (Hah). Go within to reconnect again with Home. To the Light.With You, with Source.  Is that what you mean?

SC:  Yes, because he could see how easy it was for creation to occur when he was at one with the Source that was creating. It just moved and created. The Red Planet just moved through the darkness and created life.

S:  Yes, and created everything – all the forms.  And so, it sounds like what your’e saying is – at 3D level he is struggling.  It’s been a tremendous struggle…………….he’s been like a ship afloat, sometimes sinking, on very rough seas. And he’s come for this session because he’s without a rudder.  He’s directionless and sometimes he feels like he’s sinking yet he knows he’s not meant to go down.  He feels it.  He knows it, so will you please talk to him about it.  If he were to go within and connect to You as he’s done so today, what will happen when he goes within, more and more, what will he connect to?  What will he create on his journey?  What can he look forward to?

S:  Who were the many others?

S:  Who are you please, with the greatest respect?  You said it was “myself?” So who are You that is speaking to him through him?

S:  What will happen when he remembers that he too is the I Am?

SC:  He will bring Home all of his brothers and sisters as the I Am also.

S:  Can you explain that to us with greater clarity?

SC:  There is no consciousness of identification with That. With That, That Is.  It is only the presence of That which is not knowing.  Just being.

S:  That’s a very beautiful expression.  So it’s not about remembering with the ego mind, but be-ing and embodying the I Am presence when there there is no longer a knowing of mind.  It’s just an embodying of spirit, is that right?