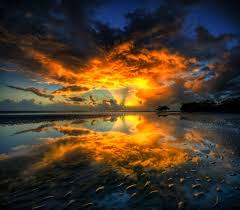 Here are excerpts of a session I did with my partner, Richard in May, 2012.

S: So are you part of that ocean of light and you are one with that?

R:  It is amazing. Cannot be described. No words to describe this.

S: Is there anyone or anything else around?

S: Do you have consciousness?

S: So you are just pure pure light?

S: You are the ISness?

R: It is the point just before the light goes out.

S: Can you explain that?

R: This is where ALL THAT IS that is light that is love. Then the parts of ALL THAT IS become light body and all you see is light around you and the light goes out, then it takes form.

S: What form does it take as the light goes out?

R: The form it can take is infinite, can go anywhere, be anything.

S: You have been there before, infinite light?

S: Tell me about that experience.

R: Infinite light JUST IS. There is no separation. It is like a drop of water in the ocean and you are just seamless. There is no separation and you cannot tell the difference. Then, just as light goes out, you can take a drop of water from the ocean. Then it has form. So when light goes out, it then takes form and how it takes form can have infinite possibilities.

S: Can you explain what some of these possibilities are?

R: An atom, or, could be a star, an amoeba or animal, being, star systems a long way away.

S: Have you experiences with any or all of these things?

S: Can you tell me about a time when you had a star system experience?

S: Can you remember the time you were on planet Xeros?

R: You cannot use linear time.

S: Were you ever in a different form on that planet?

R: It is all about the evolution of life. Once that phase of existence takes its course, there is another. The universe is multidimensional and we have the capability of shifting from one dimension to another, and morphing into different forms.

S: Do you do this frequently?

R:  It happens when it needs to happen.

S: Are you talking about the use by date?

S: Can you continue your existence indefinitely?

R: We do not deteriorate physically.  Death does not apply to us.

S: Do you multiply or procreate?

S: How many of you are there? Is there a finite number?

R: There are a few thousand. There is no need to procreate or multiply. We are way beyond that.

S: If there are a few thousand of you creating worlds and planets, over a given period, there would literally be thousands and billions of worlds coming into existence?

S: Would there be an infinite number of worlds that you create?

R: Yes, they come into existence and go out of existence.

S: Is there a balance?

R: The balance is not equal but the balance shifts according to cycles. Cos everything in the universe moves in cycles. In one part of the cycle, one part is more created than destroyed and it all goes around. In another, more is destroyed than created.

S: It’s all about balance and the higher mind that determines the outcome?

R: The higher mind does not work according to balance, according to the lower mind. The higher mind works on balance in a holistic framework. When you look at it this way, it’s very different. Because you don’t have equal numbers of black and white. In a holistic framework, the number of worlds created and destroyed are related to other factors like the time and space in relation to a particular time. So whatever goes on in one part of the universe affects another. No planet, star, galaxy is independent of everything. This is why humans on planet Earth will not be allowed to do certain things because it affects other parts of the universe.

S: What certain things are humans not allowed to do?

S: From where you are, how do you perceive humans? Are they on the brink of destroying themselves or have them come close to that?

R: Humans on planet earth are at a Cosmic Convergence point. What that means is that the forces and energies of this planet – of negativity, control, brutality, violence are trying to permeate and take over the earth. But it is not succeeding. It’s like the tentacles of an octopus going out and trying to find a grip but as it reaches out, it is finding that it has less and less to grip on. And the consciousness of the planet is shifting and the Cosmic Convergence point will determine the outcome of the planet.

However, what will not be allowed is all out nuclear war that the humans initiate as a result of their lower consciousness. Because nuclear war invokes dramatic consequences. Not just on this planet but other parts of the universe. Because it is unleashing forces that go through portals that affect different worlds.

This Haldron Collider in Switzerland – humans are playing with forces they do not understand. What they plan to do with that Collider, they will not be allowed to do, because it will have more dramatic impact on other parts of the universe, than letting off nuclear weapons on Earth. This Haldron Collider will cause time warps and time warps will be very disruptive and destructive to the opposing planets in the universe, on the other side. They will not be allowed to do that.

R: What we do is that we energise what the humans call ETs, from the worlds we create, and these worlds are of a much higher level than earth and humans. We send them down to do what they need to do.

S: How do you energise ET’s?

R: Very simple. Through our higher energy vibrations. When you do that, there are no time space limitations.

S: So when they get sent down – the ET’s; what do they do? There are so many governments playing with nukes, haldron colliders etc.

R: Interesting thing. We are not the only ones doing these things in the universe. There are others and they are not of the purity that we are. They run on the dark side. There must be a dark side for there to be a light side. The Cosmic Convergence is going to have a far reaching impact on the universe, so there is so much interest on planet earth at this point of time. The far reaching consequences are depending on humanity and a core of humanity reaching the tipping point of consciousness.

S: Is this the convergence point you are referring to?

R: Yes, the Cosmic Convergence point of this planet is not just one. It is a phase that has multiple events. One event is the Earth itself shifting its form, which is what it will do, when it passes through its procession of the Equinox cycle. Flipping of the pole shift and the vibration of the planet getting to the point where matter morphs. That is one.

The second is when the consciousness of the light workers of the planet merge, and when they merge together, there is a infusion of energy towards their collective core which then magnifies and goes out. When this happens at the same time, the earth morphs. Then there is a New Earth created.

The third event that is little known relates to the ET’s. And the ET’s require Earth to go through this Cosmic Convergence point for their next phase of evolution. The 3rd thing that happens is when the ET’s position themselves to connect with what is going on with the planet in terms with what it is shifting and morphing, as well as connecting with the shift in consciousness. They bring an important piece, that, if they were not there, the whole thing will not be complete.

S: What do you mean?

R:  Its like this. Imagine trying to launch a nuclear missile and you need 3 keys to activate it. Its like the ET’s have a 3rd key in this whole thing in the ascension of planet Earth and the light workers and like minded humans can shift into the whole new level of consciousness. The channelled information that people have, of what’s to come, is only a small part of the picture. There are a few critical pieces that people are not aware of at this point in time.

S: What are they?

R:  That cannot be known in full. What I can tell you is only this. There will be a battle in space among the ET’s. This battle will be unseen. This is when the lower level, what you will call malevolent ETs become terminated in their existence because they have gone past their use by date. That will happen but you will not see. What you will know is that the ET presence that will come in will be unmistakable. Undeniable and only those who have shifted their frequencies high enough, will be able to see them.The others that do not shift their frequencies, will not be able to see them. There are different messages today about what is to come.

R: Lots of people on this planet are channelling lots of different messages.

R: The timeline has 2 aspects to it. The perception of time in the minds of humans is not real. The 2 aspects of timeline that are important are:

1. The movement of your solar system within your galaxy and your galaxy within the universe. This is one critical timeline and the laws of the universe must be obeyed. The forces are far too strong.

2. The other timeline is not a timeline, and is dependant on what the humans do. And it’s the collective consciousness coming together, drawing all their light into the centre, coalescing it and sending it forth. That is the other timeline and its important.

And so the critical thing is not just to raise your vibration but to connect with others doing so, and as you connect with others doing so, you must be double/triple discerning with whom you connect with, because there are many, many, many who will be like wolves in sheep’s clothing. They will be like outside pillars of light, but on the inside, there is dysfunction, disconnection. It’s like a candle with bad wax. A candle with bad wax only burns part of the time and the flame and light is not pure.

Permission to share this article/video is freely granted, as long as it remains complete, unaltered, the author credited and a link to this website is included.

To learn more about Sian and her work please visit:  www.sianchua.com